"Blended Sake" that was jointly developed with sake breweries in various parts of Japan across the boundaries of the brewery. From Tohoku in the north to Kyushu in the south, we connect our thoughts from brewery to brewery in a relay system and go around the Japanese archipelago. Sake breweries or blended liquors nationwide are not in-house blends made by a single brewery, but a blend of two breweries in which the sake from the previous brewery is included in the liquor from the next brewery. And in the final month, we will deliver unprecedented sake, which is a joint blend of all 6 breweries of sake by the brewery and Sakura Hotel. "Sakura Hotel", which stores sake procured from the above below freezing point, offers a new form of sake. 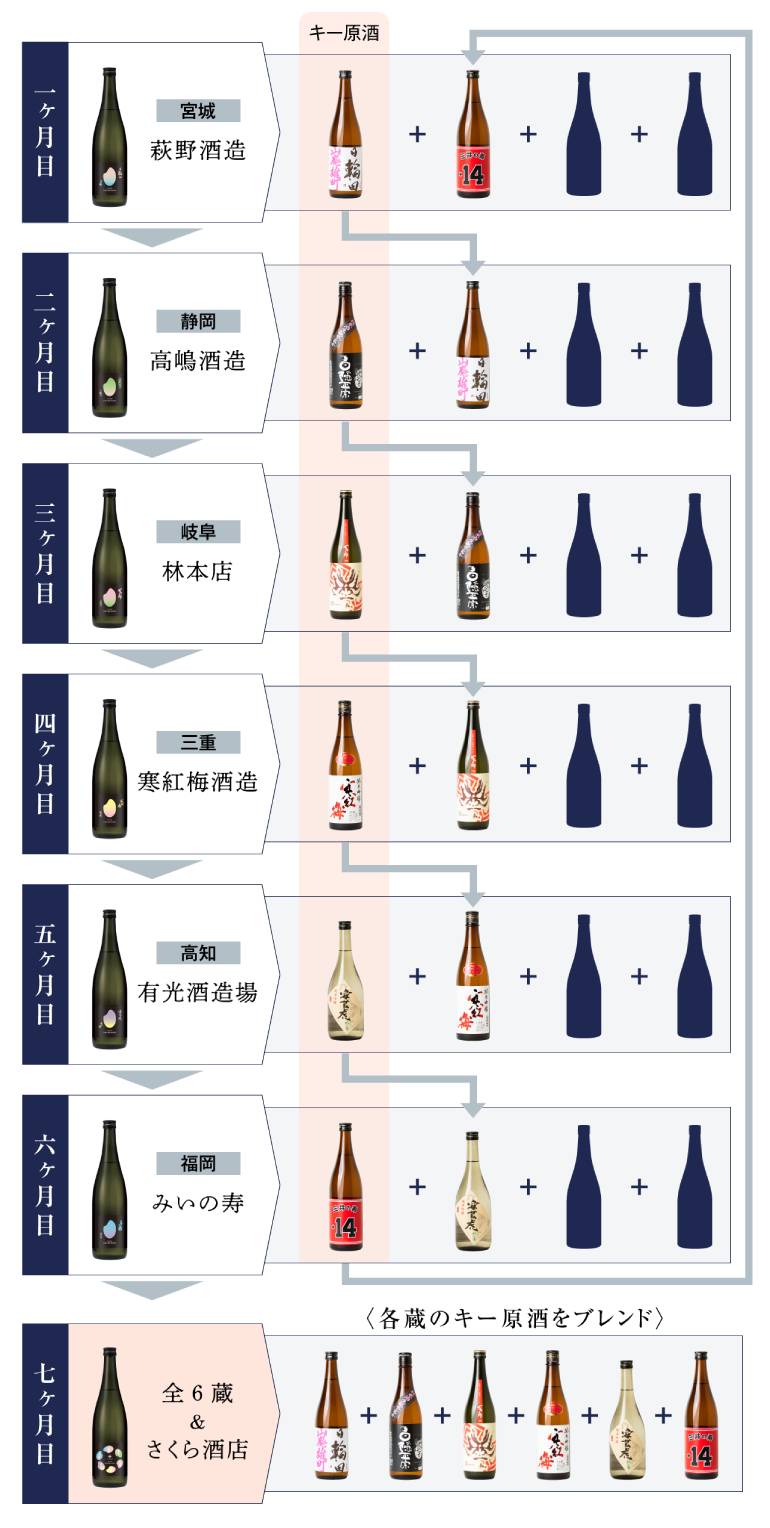 This Junmai Ginjo key Genshu is "Hiwata Yamahai Junmai Omachi", this sake is characterized by its faint fruity aroma and juicy flavor derived from Omachi.By blending "Mii no kotobuki +14 Super Dry Junmai Ginjo" with outstanding sharpness, a dry back mouth is added and the outline stands out. The rest is how to fill the outer moat and balance it, which is also the highlight of Hagino Sake Brewery's skill.

This Junmai key genshu is "Hakuin Masamune Kimoto Junmai Homarefuji" from Takashima Shuzo, the sake brewed by the traditional technique called Kimoto-zukuri is a mellow yet crisp, hot and delicious sake.By blending "Hiwata Yamahai Junmai Omachi' that is irresistible for sake fans. A collaboration by this 2 breweries that has in common that they will create a new future by returning to the origin.

This Junmai key genshu is "Hyakujuro Junmai Ginjo Miimasumon" from Hayashi Honten, a refreshing scent, fine and high-quality sweetness and pleasant stimulating acid. An excellent balance of the finish with a light bitterness.By blending "Hakuin Masamune Kimoto Junmai Homarefuji". Two breweries with different tastes and manufacturing methods. It will be the most unimaginable taste this time. Enjoy the fusion of tradition and innovation that would not have been possible without this project.